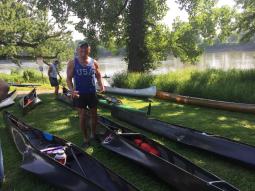 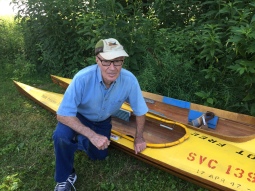 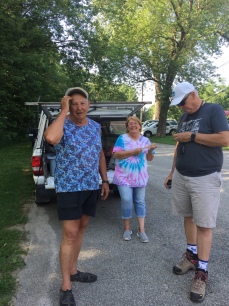 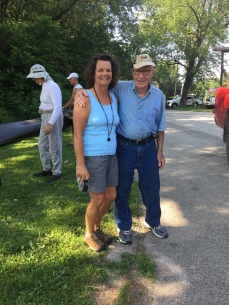 The Great Wabash River Races of 2018 were unique in several ways – but not in the shallowness of the water!  But more on that one in a moment.  This was a race without a director.  Terry had a funeral to attend, so Roger Crisp’s daughter, Julie, handled registration while Roger timed the afternoon races and the team of Bill and Betsy Arnold took care of the morning timing chores.  Many thanks to all who chipped in to help!

This race was also a classic reunion like we haven’t seen in a while: alongside our regular “classics”, Roland Muhlen came over from Ohio to race, Bob Stwalley stopped in to deliver a couple of special boats to Lori Blaylock and Betsy Arnold, and Gary Hill stopped by just to say “hi”.  The USCA started in Bob Stwalley’s living room, Roland Muhlen was at the first meeting, and Gary Hill is considered the father of canoe racing in Indiana.  That’s some history!  We also had a bit of fun doing some boat testing at this race; Betsy brought out her Green 7 surf ski (a unique South African ski) for us to try, and Lori Blaylock decided to paddle Bob Stwalley’s boat in the race for her first paddle in the boat.

The morning race conditions could best be described as rather hot and muggy.  But that didn’t prevent an outstanding turnout for the canoe classes.  Eight C1’s took to the line, along with our classic aluminum C2 paddlers, a pair of younger men in a recreational C2 Men, and Sonja Gilman was back on the line paddling C2 Women with Ann Raiho.  Deb Kanost got in some morning practice in preparation for the Nationals by getting in a morning kayak run with the canoes.  Roger Crisp paddled Sea Kayak in the morning, even though his time would be applied to the afternoon classes, so he could help with timing.  This year’s course was altered from past years due to boat restrictions under the upstream bridge from Mascouten park; instead of heading upstream, we headed downstream about 3 miles, made a bridge turn, and returned.  Which sounds simple enough.  Unless you know the course!

Downstream was a generally fast, fun run in the current but working back upstream was often brutal.  The shallows got shallow enough that getting sufficient water to the paddle to make a difference at times seemed to be an exercise in futility, particularly while the current was attempting to arrest all progress!   Currents did entertaining things to boat directions; I was encouraged to hear that others besides myself were sent off in random directions by the flows around the sand bar peninsulas and around various logs and such.   Meanwhile, the opaqueness of the waters hid rocks and logs (and probably the Loch Ness Monster) that could severely “impact” your ability to remain upright and dry.  Just ask Skeet Craig…

As we started the race, the C1’s were bunched together pretty well, but gradually we began to separate into our own “races within a race.”  Bill Kanost set a blistering time in the morning, but no doubt having Roland Muhlen breathing down his back most of the race brought about some enhancement to his performance.  Tom Thomas was back just a bit, with Skeet Craig, myself, and Guy Gilman stretched out behind.  Tom, Skeet, Guy, and I seemed to keep an almost constant distance between one another throughout the upstream portion of the race.  And then Skeet unknowingly bumped a log and sampled the cool, not-so-clear waters of the Wabash, losing two places in the process. Meanwhile, Deb Kanost had been running her kayak with Skeet, but when Skeet went over Deb seemed to gain new energy and she proceeded to stretch out the distance between us.  Seems to be a Kanost tendency…

When Sonja volunteered to paddle with Ann, she said “I’m just going to paddle easy…”  But Sonja is a racer, and we really don’t know how to paddle easy.  Coming past the two of them after completing the bridge turn I noticed that “taking it easy” seemed to take on a different meaning…

George and Hilman found some good competition in Kent and Tim.  I didn’t see much of their race, but I understand they had some fun.  Dave Hendrich’s health is improving and his times are moving back up again.  Larry brought up the end of the C1’s, paddling a rec boat, but he made up for it in the afternoon.

Not much changed in the afternoon races as far as river conditions, but a brief, light rain and some overcast brought about a significant cooling that made conditions much nicer in the afternoon.  Bill and I squared off in K1 Men open, with Lori paddling Bob Stwalley’s old boat “Fancy Nancy” in K1 Women open, while Larry, Matt, Deb, and Roger made up the Sea Kayak field.  As noted above, Roger actually paddled in the morning so he could time the afternoon races, so he was at a bit of a disadvantage in terms of the weather.  But he did have a cool new boat!  Feeling worn down from the morning races, Bill and I paddled side-by-side chatting sociably on the way down stream (outside of a quick sprint by Bill to drop Matt off his wake).  But I knew it would last going upstream.  Bill hit some shallows, popped the boat, and took off with energy I just didn’t have at that point.  With a bit of a lead, as we rounded the first of the two sand bar peninsulas, Bill headed for the west bank, so I opted to try the east bank, know the west bank had some very shallow regions and Bill would have to work his way back out again at the second peninsula near the finish.  For a while it looked like I made a good choice; I was reeling Bill in and feeling good, but then the east bank became suck water with a stronger current for a significant distance and I lost all I gained.  But such is racing!  Meanwhile Larry Swift and Matt Conrad were pushing each other hard in the Sea Kayak class. Larry pulled off the win, but Matt wasn’t far behind – and Deb wasn’t far behind them.  Deb has really become a strong K1 paddler!

We all had a great workout and a lot of fun!  Many thanks to Terry, Roger, Julie, and the Arnold’s for all their work in putting on this race.

Surf ski and kayak racing form a huge part of my life; as soon as the water is open in the Midwest, I'm on it 'till it freezes over again! Follow the aquatic adventure with the latest boats and equipment from Stellar Kayaks, Mocke Paddling Products, and now Land Paddling too. See you on the water! Steve ;) View all posts by River Bear Racing